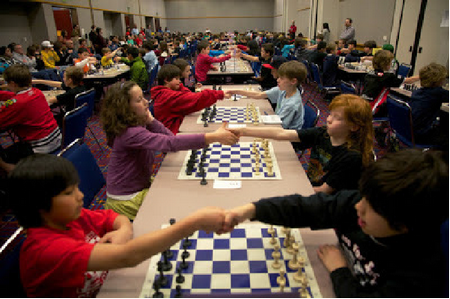 For the Covid year 2021 tournaments: The 2021 online tournaments will be grade level (K-3, 4, 5, 6, 7, 8, 9-12) five round swiss style individual tournaments held on the lichess.org website. In order to play in this tournament, players MUST become a member of the Chess for Success Oregon 2021 Tournaments Team (https://lichess.org/team/chess-for-success-oregon-2021-tournaments). This is a security measure so only Team members will be able to play in the tournaments. Acceptance into the Team is by permission. Every prospective player must get a lichess user name and then request to join the Team. Approval of that request REQUIRES that a message be sent to richard@chessforsuccess.org with the following information: 1. the player's username; 2. the player's name; 3. the school where the player is registered; 4. the player's grade level; and 5. a personal (NOT STUDENT) email address for notifications. Without this information, the player will not be accepted into the Team and will miss the possibility of playing in this year's state-wide tournaments.

Since these tournaments will be on the lichess.org website, all pairings will be done by the site software. That opens the possibility that players may play someone from their school -- it is out of our hands and the pairings will stand as set round by round. Since this is a virtual tournament, there is the possibility of technical issues -- loss of connectivity, lag time, personal computer technical issues, etc. -- these are all out of our control and adjustments will not be made for any problems of this nature.

The starting time of 9am is important to observe. Being late will be penalized by the web site software. There will be no pre-arranged byes. Players should check-in at all tournaments between 8:30 to 8:55am, virtually in the Tournament "lobby."

Each round will have an announced start time that will not change. Taking a break for lunch will not be entered in the timings of the rounds. As each tournament is announced, please be certain to enter only the appropriate grade tournament. If the player does not register for the correct tournament, there will not be a possibility of competing this year.

These tournaments have no registration fee, but putting a little bit into the "tip jar" on the Donate page would be appreciated. There will be trophies for 1st and 2nd place finishers. Delivery of the awards will be handled on an individual basis. We may have to ship them or we may make arrangements for a safe distribution of trophies from the Chess for Success office (just off the Sylvan exit from US 26). These tournaments are not rated and are not an OSCF qualifier.

At this time there is no State Team tournament planned, but Chess for Success and OSCF are exploring various possibilities for perhaps offering a jointly sponsored event.

1967: OMSI, with the sponsorship of The Oregonian, began hosting various scholastic chess tournaments, some at the museum in Washington Park, others in Eugene and Salem in the early 1970s.

1981: The Oregonian dropped its sponsorship and OMSI ceded the organizational duties to the Oregon Scholastic Chess Foundation, but continued to host the tournaments.

1998: Chess for Success accepted the responsibility of running the tournaments to ensure the continuation of this long-held tradition.

2020: The tournaments were canceled due to the COVID-19 pandemic